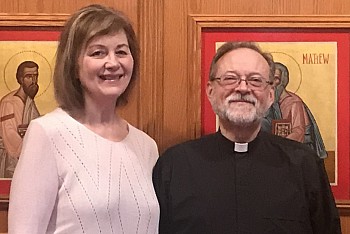 After graduating from St. Tikhon Seminary in 1979, that same year he was ordained by Archbishop Valerian (Trifa) into the Holy Diaconate at The Nativity of the Ever Virgin Mary Hierarchal Chapel at Vatra Romaneasca in Grass Lake, Michigan, and then the Holy Priesthood at St. George the Great Martyr Romanian Orthodox Church in Canton, Ohio.  In 2007, Fr. George received the Synodal Award to rank of Archpriest by the Holy Synod of Bishops of The Orthodox Church in America.

Fr. George enjoys art, music, computers, many outdoor activities, and is an avid woodworker handcrafting icon stands, tables and other church items.  He has held leadership positions in the Regina, Northwest Indiana, Canton, and Shenango Valley Clergy Associations, as well as founding clergy and director of the Orthodox Christian Mission Centre of Canada at Fort Qu'Appelle, Saskatchewan.  In the Romanian Orthodox Episcopate of America, he has served multiple times as a member of both the Episcopate Council and the Spiritual Consistory.  A strong supporter of the youth, he volunteered for many years as staff member, instructor and chaplain for both Camp Vatra at Vatra Romaneasca and Camp Saint Nicholas at Fort Qu'Appelle, as well as Spiritual Advisor to the American Romanian Orthodox Youth (AROY).  Fr. George has also served as Spiritual Advisor to the Association of Romanian Orthodox Ladies Auxiliaries in North America (ARFORA) and the Orthodox Brotherhood of Canada.  He speaks English and some Romanian, serving in both languages.

In 1978, he married Paula Ann Calin of Chicago, Illinois.  Preoteasa Paula has been active in the Vatra Camps and served on the AROY National Board.  Other activities include being a broker floor employee on the Chicago Mercantile Exchange, working with the Merrillville school system, parish secretary of St. George in Canton, and working with Visiting Angels HHA.  She also dedicated herself to the church school programs as director in the parishes of Regina, Merrillville, Canton, and Hermitage.  They have four adult children: Alexandra Marie (Michael), Nicholas George Daniel (Kristie), Catherine Anita (Eric), Christopher John; and seven grandchildren.